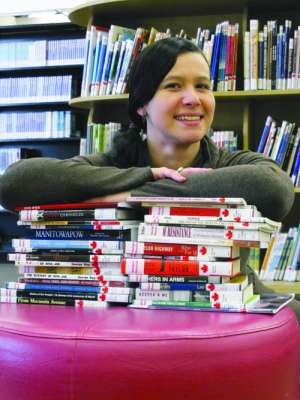 KATHERENA VERMETTE is a Métis writer of poetry and fiction, whose work has appeared in several literary magazines and anthologies, most recently, Manitowapow – Aboriginal Writing from the Land of Water (Highwater 2012), and upcoming in cv2 and Canada and Beyond: A Journal of Canadian Literary and Cultural Studies. She has won numerous awards and accolades, including the 2013 Governor General's Literary Award for Poetry, as well as  including grants from the Canada Council for the Arts, Manitoba Arts Council and Winnipeg Arts Council. She is an active member and performer with the Aboriginal Writers Collective of Manitoba, and editor of their last collection xxx ndn (2011).

An experienced workshop facilitator, Vermette has worked extensively with marginalized groups and at risk youth. Her workshop pedagogy concentrates on the basic creative process and the use of writing as a means of developing coping skills. Her goal, first and foremost, is to assist people to find their own voice and tell their own story - a process that leads to pragmatic (increased communication skills) as well as emotional (increased resiliency skills) benefits.

Vermette has an MFA in Creative Writing from the University of British Columbia. Vermette lives, works, and plays with her two daughters and two cats in Winnipeg, Manitoba, Canada.

To learn more about her, please visit her website.