Maybe I shouldn't have smiled ... But I was on holidays in a small town close to Algonquin Park.

While I and my family were enjoying the beautiful environment of this region, I was also looking for stories and histories of the Aboriginal people of the area - after all, the park is named after one of their nations, the Algonqins.

However, I did not find anything - except a stereotypical display of pre-contact life in the Visitor's Centre (which is very spacious and tells a lot of other stories) and this life-size figure (together with another one of "an Indian" in a canoe) in front of a craft store for tourists. 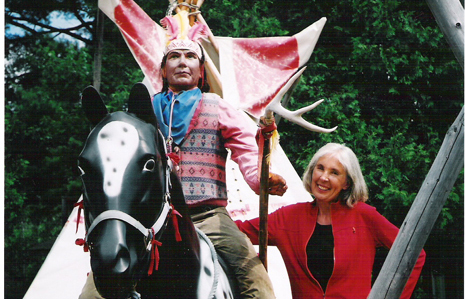 So in the midst of total ABSENCE of the real people and their real stories about how they still have to fight for land they had never signed away (like the Algonqin Park) I found the PRESENCE of images that relegates Aboriginal people to the past, to the imaginary and the exotic, that commercializes their culture and dehumanizes the people.

Algonqin means "allies," and the Algonqins were allies of the British in 1812, but instead of being rewarded for their efforts they had and still have to fight for their rights.

It is hi/stories like these that need to be told in Canadian educational institutions. This is why I teach in Native Studies.

Renate Eigenbrod's research interests revolve around theories of decolonization in relation to Aboriginal literatures in Canada and Indigenous literatures globally. After investigating the ethics of positionality, she is presently working on the role of Aboriginal literatures within the larger societal discourses of genocide on the one hand and of reconciliation and redress on the other. She is also interested in lesser known, community-based literary activities and in the literature created by a new generation of Aboriginal writers.

R. Eigenbrod.  “Who Wants These Stories? Reflections on Ethical Implications of the Re-publication of a Missionary Work.” Journal of Academic Ethics 4 (2006): 221-243.

Since Fall 2009 R. Eigenbrod has been a member of the English Studies in Canada (ESC) Editorial Advisory Board.

R. Eigenbrod has organized several sessions on Aboriginal literatures for national conferences and was the co-organizer for two conferences:

R. Eigenbrod gave workhops for the Winnipeg School Division on the integration of Aboriginal literatures into the high school curriculum.

Academic and Other Professional Achievements

University of Manitoba Outreach Award in 2007

Chair of Canadian Studies Committee for the Shastri Indo-Canadian Institute, 2006

Research Associate for the Institute for the Humanities, University of Manitoba, January - July 2005

Special Award from the Curriculum Foundation to develop "A Teacher's Resource Guide to Canadian Aboriginal Literatures" (in collaboration with Georgina Kakegamic and Josias Fiddler from Sandy Lake, Ontario). Website for curriculum foundation:
http://curriculum.org/storage/30/1278480166aboriginal.pdf