BACK TO GALLERY / ARCHIVES
UPCOMING/CURRENT EXHIBITIONS: To be announced.

Grasp the Nettle: 2016 MFA Exhibitions
The School of Art and School of Art Gallery are pleased to present thesis exhibitions and oral examinations by Master of Fine Art students: Gwen Freeman, Grace Han, Shaun de Rooy and Phoenix Thomas. All events are free and open to the public.

Gwen Freeman: Who's Afraid of Female Pleasure?
Gwen Freeman’s work is an exploration of the body. She uses photography as a sensual medium that acts similar to paint to convey visceral and ambiguous qualities in abstract forms. Her intent is to create an intervention in the content of her images.

Gwen Freeman is an international student from the United States who received her BFA from The School of The Art Institute of Chicago. She is a Master Fine Arts student at the University of Manitoba.  Her practice expands into photography, video, and performance.

Two Paths, Two Identities, One Individual explores Grace Han being somewhere in between as an artist. Although she was traditionally trained in Korea – where preserving the traditions of Korean ceramics was essential – she finds that she can be free and truly herself as an individual artist in her new home in Canada. Speaking two distinct languages has also broadened her views in art – she finds that the process is an important part of her work. By entering into the space that Grace Han creates, the audience can experience her struggles, interact with her work where her emotions have been captured, and see what she truly is in between.

Grace Han is a ceramic artist originally trained in Seoul, South Korea. She received her Bachelor of Fine Arts from Dankook University where she specialized in traditional Korean Ceramic techniques and skills. She then worked for several years in one of the biggest ceramic companies in Korea and built on her ceramics knowledge and experience outside of academia. She immigrated to Canada in 2011 and is pursuing her career as a ceramic artist in her new home.

Shaun de Rooy: The Apparatus
The Apparatus is an exhibit that explores the dichotomies of practical and theoretical definitions of usefulness. Presented within the exhibit is a series of 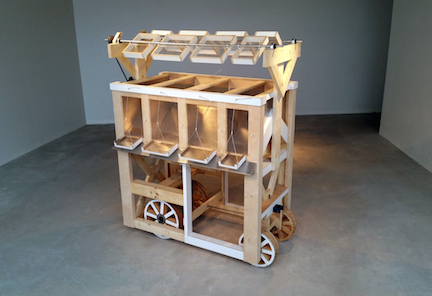 machine-like sculptures that pose the questions: what makes an object useful and on what basis do we define or categorize its usefulness?

Originally from Winnipeg, Manitoba, Shaun de Rooy completed his BFA at the University of Saskatchewan, where his work was awarded and exhibited as part of the International Sculpture Center’s Outstanding Student Achievement in Contemporary Sculpture. After exhibiting work in Saskatoon, New Orleans, New Jersey and Winnipeg, Shaun returned to Winnipeg to complete his MFA at the University of Manitoba.

Phoenix Thomas: By Some Trick of the Light My Skin Was Darker
Phoenix Thomas describes himself as a half-native who appears Caucasian, and his work explores the relationship between North America and its Indigenous population. 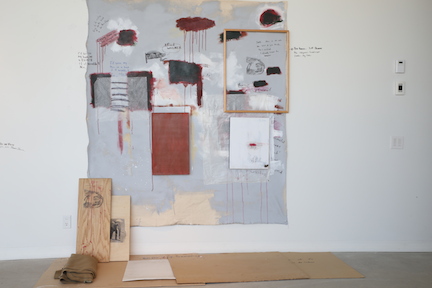 He investigates this relationship through the unique perspective of someone who doesn't fit in with either community. He makes installations that combine text and painting to tell stories about his mixed racial identity, in hopes of conveying an understanding between these two peoples.

Phoenix Thomas is an Ojibwe of Walpole Island First Nations Reserve. Being born half native and appearing Caucasian, has led him to feel out of place when it comes to integrating into either community and so he has taken this opportunity to express this relationship through art. He graduated, BFA from the University of Windsor in 2013 and has gone on to pursue MFA at the University of Manitoba.